CERT (Computer Emergency Response Team) is a technical coordination team regarding to internet network incident in the whole world. Recently, the team is improved by RFC 2350 <http://tools.ietf.org/html/rfc2350> and name it as CSIRT (Computer Security Incident Response Team).

CERT or CSIRT in every country is built by community. Though some of them is supported by their country such as KrCERT (South Korea), JPCERT (Japan), AusCERT (Australia), etc. In each country, CERT has various job authority and constituent. Some CERTs have a little bit different pattern one from another.

For example, CERT in South Korea has authority in the national cybernetiquette security; meanwhile CERT Australia has constituent and membership so that it got fund to support its activity. There are also CERTs/CSIRTs built by limited community or country with

limited scope for limited circle, such as MilCERT (Military), GovCERT (Government), BankingCERT (Banking), ISPCERT (ISP), etc. CERT/CSIRT does coordination not only in a country internally (among CERT/CSIRT or organizations) but also internationally.

Many times a coordination needed among CERT/CSIRT when involving internet network incident. A good relationship is important to have among CERT/CSIRT, and to facilitate it a regional forum is built by all CERTs in Asia Pacific, named APCERT (Asia Pacific CERT), including ID-CERT as one of the founder.

In 1998 there was no CERT in Indonesia. Based on that DR. Budi Rahardjo, an internet security expert, encouraged himself to establish ID-CERT. At the same time countries around Indonesia began to establish their own CERTs and this continued into Asia- Pacific forum which later became the APCERT.

First APCERT Meeting was attended by DR. Budi Rahardjo and Andika Triwidada in Tokyo, Japan in 2001. APCERT Meeting became annual agenda held taking turn between its members. Japan and Australia are two most active members in APCERT. ID-CERT has a difficulty to attend this annual meeting, that is funding, which always depends on sponsorship.

ID-CERT wishes to remain standing as a non-governmental organization, independent, but received an allocation of government funding as a contribution to the CERT. ID-CERT is just being reactive (not active) in responding and handling a case of incoming or reported incident by complainers. ID-CERT does not have the authority to investigate a case thoroughly, but just become a liaison who can be trusted, especially by those who reported incident.

ID-CERT is being reactive, that is doing the job based on incident reports received by ID-CERT. The most incident reports received by ID-CERT is phishing. The reports were received personally by DR. Budi Rahardjo, Andika Triwidada, and Ahmad Alkazimy, then sent on to the reported site or to the related provider. Mailing list is also used to explain some cases and their progress.

Now, ID-CERT has a “helpdesk” to manage incoming reports and resolving progress. At this time, ID-CERT is run by professionals and supported by volunteers. Demand of “helpdesk” is related to improve services and handle the incident complaints, also in the need of presenting a statistic of handling cases, that always presented at APCERT Meeting. 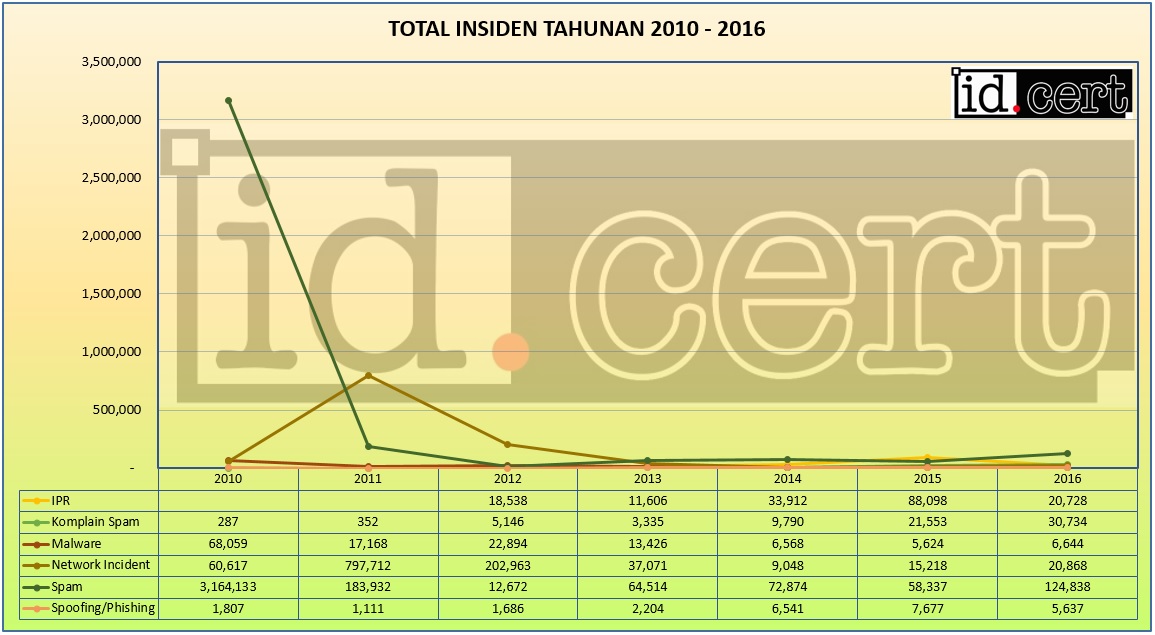 ID-CERT in the last three years have done a research related to incident handling based on complaints, named Incident Monitoring Report, that involve ISP, NAP, Telecommunication Operator, and non-ISP such as Government and company. It was started in 2012 with name Internet Abuse Research, ID-CERT was one of the supporters of the research. Since March 2012, the research became permanent activity for ID-CERT. It hopes to be continuous so that Indonesia will have a primary data of Incident Monitoring Report occuring in Indonesia. In 2010 the research involved 13 organizations of respondent, and in 2011, it's been 38 organizations of respondent joined the research. The amount of complaints received is about 290,297 per month: Most cases are from abroad because they found difficulty to contact the site administrator of the problem site. They trusted ID-CERT to report the case. ID-CERT has been made good relationship with neighbourhood CERTs and some of them have visited ID-CERT in Indonesia.

ID-CERT plans to have Statistics of Malware in Indonesia. The research is to find out the direct impact and readiness of Indonesia internet society to virus/worm/malware.

Some methods to use are:

The most ID-CERT’s attention is: what exactly will be expected by society from ID-CERT.

ID-CERT hopes that many more respondent to participate in various researches run by ID-CERT, for greater good of Indonesia internet in the future. ID-CERT also hopes that in establishing it ID-CERT gets support especially in operational matters.